Who Stole The Ads From Ad Week? I'm on my third morning at Advertising Week and I've yet to see an ad.

All right, Bob, here's some 21st-century advertising. (You're welcome.) 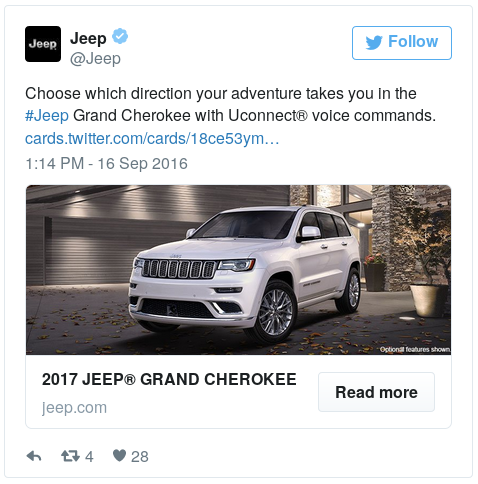 That's the kind of thing that the sessions at the big conferences are all about. It's a targeted ad.

But even though targeting and the technology behind it are core subjects at Advertising Week, somehow everyone knows that it would be uncouth, unwise, or both to show targeted ads to people there.

Advertising Week participants recognize at some level that actually showing a targeted ad to someone is an act of communication aggression. It treats the recipient as a component of a mechanism, like a flask moving down a bottling line at a distillery.

In the Jeep ad above, I'm targeted as a person who doesn't drive off-road and basically can get by with a minivan. So instead of honestly communicating about the qualities of the Jeep brand, they throw together something that some algorithm says is more my speed.

The only information that ad offers me about Jeep is a little insight into what that algorithm, that Jeep paid for, thinks about me. Some new Jeep has the same kind of electronic doo-dads as every other new car does, and the software predicts that I care.

Brand advertising works differently. Rory Sutherland explains how people with limited information about complex buying decisions can use reputation to help. Reputation is hard to build, brand ads can help if you do them right, and those ads are the kind of thing that you show at a conference.

Brand advertising does have complicated math in it, but it's behavioral economics math, with the calculations done on the "reputation coprocessor" in the user's brain. (For the data nerds out there, reputation-based advertising is like rendering your graphics on the GPU on the client, instead of paying for cycles in the data center. Reputation math is way cooler, and has way more force multipliers hidden in it, than direct response math. But the power to use that math looks "creative" so is out of fashion.)

So many of the proposals for funding Journalism are based on allowing people to buy out of seeing ads. That only makes sense if you assume that ads are all targeted, not worthy of being shown at a conference, and adversarial. But when the web can fix a few old bugs, valuable print-like ads can emerge. One bright spot: Firefox Tracking Protection is now available as a Test Pilot experiment. Give it a try. A lot of the targeted ads will disappear, but you might just find your inner behavioral economist paying some attention to the ads that remain.